According to ASME VIII Div. 1 every hermetic vessel operating at a pressure above atmospheric pressure must have a Pressure Relief Device (PRD), either a relief valve or a rupture disc.

The purpose of a PRD (Pressure Relief Device) in processing plants is to prevent damage to equipment, prevent injury to personnel or eliminate any risk to the welfare of the community at large. The function of a PRD is not to control and/or regulate the pressure in a vessel.

Rupture discs are one of the safest and most widely used solutions for pressure relief, they can work with liquid, gas and/or steam media. Nowadays there are two types of rupture discs, forward or direct acting and reverse or inverse acting, being the latter the most used and safest. When we talk about these types of action, we refer to their geometry. Rupture discs are dome-shaped, i.e. they are concave; when they are forward acting, the pressure of the vessel to be protected acts on the concave part and when they are reverse acting, the pressure acts on the convex part. They are also classified by the way they break, there are fragmentable and non-fragmentable discs; the latter being the safest, since when they break they do not disintegrate and only open, releasing and relieving the internal pressure of the vessel.

Fike, which has been manufacturing rupture discs for more than 50 years, has a wide variety of materials, the most common being 316L stainless steel, but also uses any special alloy such as Titanium, Monel, Hastelloy or Inconel. Within its portfolio of solutions there is also graphite, an application that is also very common. Carbon steel is not an ideal material for manufacturing rupture discs because of its high carbon content, which does not allow for proper deformation. 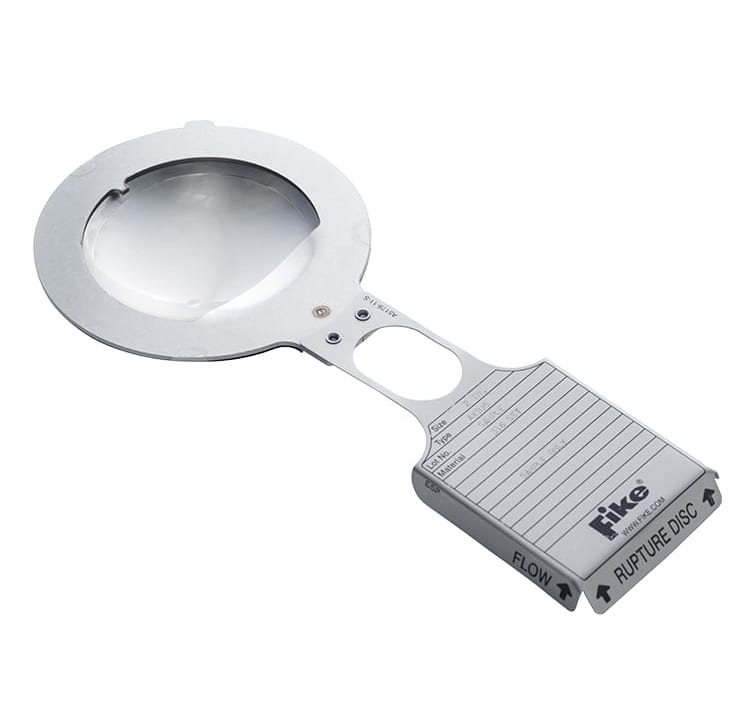 It is important to know the meaning of the following terminology:

Disc diameter and burst pressure should always be defined by process specialists. There are three mathematical methods to determine the sizing of rupture discs, these are:

Back to top
flexilatina2022-11-18T20:36:11+00:00
Page load link
We use cookies on our website to provide you with the most relevant experience by remembering your preferences and repeat visits. By clicking "Accept all", you agree to the use of ALL cookies. However, you can visit "Cookie Settings" to provide controlled consent.
Cookies AdjustmentAccept All
Manage consent

This website uses cookies to improve your experience while you navigate through the website. Out of these, the cookies that are categorized as necessary are stored on your browser as they are essential for the working of basic functionalities of the website. We also use third-party cookies that help us analyze and understand how you use this website. These cookies will be stored in your browser only with your consent. You also have the option to opt-out of these cookies. But opting out of some of these cookies may affect your browsing experience.
SAVE & ACCEPT